Press Conference Held to Announce Determination of the Fire 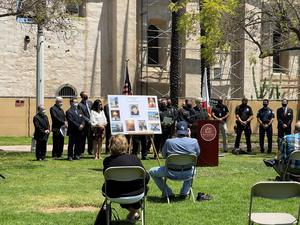 On behalf of the entire Mission San Gabriel community and the Archdiocese of Los Angeles, I want to first express my gratitude to all of the first responders and agencies who worked to respond and investigate the devastating fire at the Mission.
After eight months of investigation, fire investigators from the Verdugo Fire Investigation Task Force and the San Gabriel Police Department, along with investigators from the Los Angeles City Fire Department, and both local and federal law enforcement agencies diligently conducted a comprehensive investigation into the circumstances surrounding the Mission's roof fire on July 11, 2020. Today a press conference was held to announce that the Mission fire was intentionally set, and as such, deemed an "Arson Fire." A suspect has been identified and charges relating to the case have been filed by the Los Angeles County District Attorney's office.
I want to personally thank Division Chief Chris Eakman of the San Gabriel Fire Department, who has walked with us from the early morning on the day of the fire until now, and whose clear thinking saved some invaluable artwork and artifacts from smoke damage; and Detective Banuelos of the San Gabriel Police Department who has kept us apprised as the ongoing investigation has unfolded.
We pledge our continued cooperation with the District Attorney's office as we seek justice tempered with mercy.
Our community of faith at the Mission is close-knit and has been rocked by this incident. For many life-long parishioners, this fire has been a little death. But we are resurrection people, and look ahead to the future with a renewed sense of hope and purpose. Behind me, you see signs of transformation. The timeline of the restoration is still unfolding, but it is our hope that the newly designed roof will be finished by the end of August as we prepare to celebrate the 250th anniversary of the Mission's founding on September 11, 2021.
And finally, we ask for the grace to put into practice the difficult instruction of Jesus in Matthew, chapter 5 to "pray for those who persecute you."
Fr. John Molyneux, CMF, Pastor
Print